The boat lift of Strépy-Thieu

When you come to the Strépy-Thieu Funicular Lift, take the lift on board a barge!

Visiting the funicular lift of Strépy-Thieu: again in 2019!

With the aim of improving the visit, the eighth floor is in the course of the alteration work of an Interpretation Center on the Belgian inner navigation and is not accessible all this season. Follow our news.

One of the tallest funicular boatlifts in the world, right here in Strépy-Thieu

The size of this structure is awe-inspiring.  This colossus measures a soaring 102m in height, and at the top it’s the size of a football pitch!  You can see it standing over the town of Havré like a giant black mushroom as you approach on the E19-E42 motorway from Mons.  And when you get up close, it’s all you see: the funicular boatlift of Stépy-Thieu dominates the Canal du Centre and the entire valley.

But why a funicular boatlift?

At the end of the Second World War, it was clear that the Belgian system of canals and waterways needed to be standardised and suitable for 1,350 tonne barges – a step up from the traditional fleet of barges used on the canals, with a maximum capacity of only 300 tonnes.  Additionally, the European Conference of Transport Ministers in 1957 recommended that the canals be adapted to suit 1,350 tonne barges.  The Strépy-Thieu project was the final step in the Belgian canal improvement programme.  It is strategically important on a European level because it forms a link between the Escaut and Meuse basins, and also between the port and region of Dunkirk and the Rhine basin.

This structure stands between two communes: Strépy-Bracquegnies and Thieu.  The first of these joined ten other communes in 1977 to form the region of La Louvière, and the second is part of Roeulx.  As such, Strépy-Thieu does not actually exist on any map – so the official address for the lift is Thieu.

At first glance, this is an imposing, dominating structure.  To enter it and reach the ticket office, you’ll need to walk through the entrance at the base… then climb up through the core, all the way up to the panoramic viewing point at the top where you can experience the “Land of Genius” interactive tour.  Your sense of awe will quickly turn to admiration as you gaze out over the landscape or towards the beating heart of the structure, with its cables, gears and splendid machinery.  “Technology, built for man: clean, beautiful and efficient”.

After a number of years spent working on the design of the Strépy-Thieu funicular boatlift, the only one of its kind in the world, work finally began in February 1982.  20 years later, on the 30th of August 2002, the connection for the brand new canal, stretching 12km and built at the boundary between the Roeulx (Thieu) and La Louvière (Strépy-Bracquegnies) regions, was finally open for navigation.

The funicular boatlift is 102m tall and 135m long.  It lets boats cross a height difference of 73.15m and single-handedly replaces the four boatlifts and two locks on the historic Canal du Centre.  It meets the needs of all current and future merchant navigation.

The Sart water bridge was the final phase of the construction project.   This engineering project measures 498m long, is supported by 28 reinforced concrete pillars and sits astride a motorway interchange.  It “welcomes” motorists as they drive into La Louvière, but does not seem to dominate them.  “Pusher” techniques were used to build this concrete aqueduct: no less than 65,000 tonnes of material was moved using powerful hydraulic jacks.  And this was how the waterway link was finally completed, on the 2nd of September 2002, breaking another record in the process (an award in the “exceptional structures” category, by the International Concrete Federation in 2003, in Osaka).

Whether you’re on your own, with the family, out with friends or part of a tour group, the ASBL Voies d’Eau du Hainaut offers all sorts of different ways to get out and enjoy the Funicular Boatlift of Strépy-Thieu.

The Sloping Lock of Ronquières 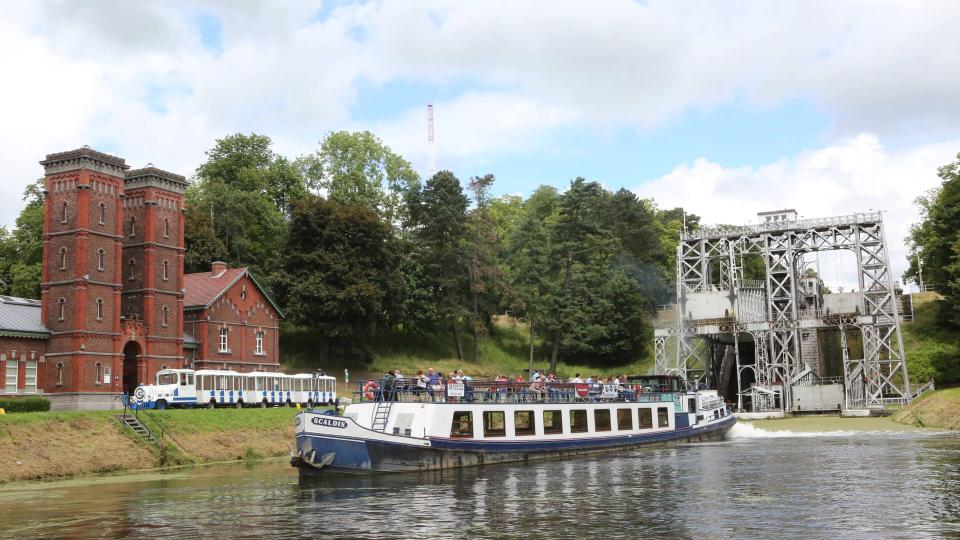